Drag Me to the Movies presents Wayne's World 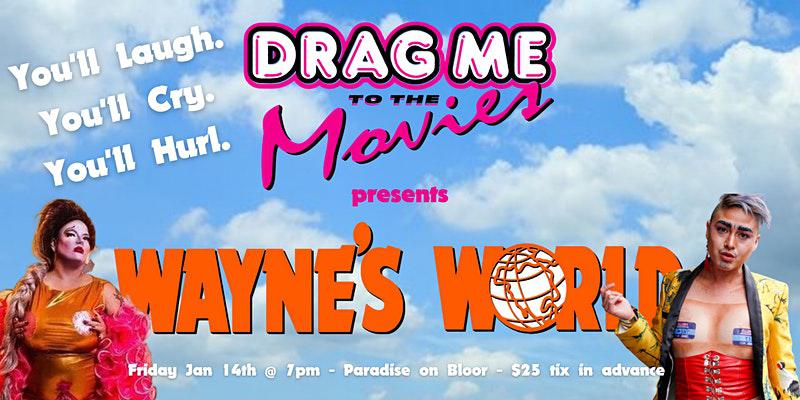 DRAG ME TO THE MOVIES is an interactive movie-going experience featuring drag artists, movie bingo and prizes. It is hosted by Weird Alice.

*Covid Vaccine passports will be checked during this event

Years before he became a household name following critical and commercial smash hit THE LOVE GURU, Mike "Michael" Myers played against type in this dark depiction of fractured American youth.

The eponymous Wayne World - disaffected and unsuccessful - lives deep in suburban America. His gun rack and reckless driving are the only things he has to substitute for the absent hope that life may one day improve.

At times truly disturbing, this no-holds-barred depiction of Generation X's troubling addiction to mass media is often considered a cinematic version of the popular novel INFINITE JEST, right down to its decision to evoke a world in which women are unable to exist outside of Freud's retrogressive virgin/whore dichotomy.

Arguably, by the 1990s the ridiculousness of male chauvinism had been proven repeatedly and needed no longer to be explored by the creative industries, yet even with this caveat in mind, WAYNE'S WORLD is not without its "old-world", Mad Men-era charm.

Particular highlights include a young Rob Lowe playing the contrasting "perfect man" to Myers' charmless, deadbeat loser, as well as the rapid-fire series of metatextual alternative endings dramatising that Wayne's life is going nowhere, and he's living in a dream.